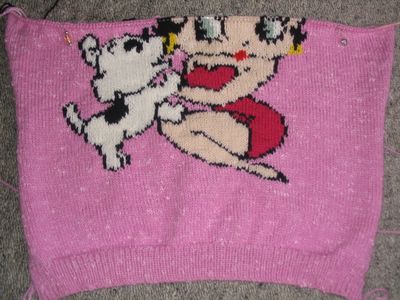 You are all too clever, how did you guess? Yes I suppose those legs are a bit of a give away. This winter I bought myself some Betty Boop pyjamas which gave me the idea to knit her and sent me on a knitting pattern search. I tried ebay but kept getting outbid, there is only so much I was prepared to pay for the gal. Then one day I went into my very own LYS and was looking through the patterns and would you believe there she was, hiding on the bottom shelf. Now this pattern was designed for jumpers but after being inspired by Cindys Doctor Who zippy uppy cardi, I decided that she belonged on a jacket. The next decision was what colour would I make the jacket, and really there was only one choice, pink. Then what yarn, well Betty herself was easy, I could use leftovers in the stash but for the main part I have chosen Cleckheaton Country Silk.

Intarsia is fiddly but also very addictive, it is so exciting as each row produces a bit more of the picture. The biggest thrill so far has been reaching her lovely sea green eyes, that is when she really came alive. Now I feel like I am on the home stretch as only the top of her head to go and the main part will be finished, then it will just be plain knitting for the remainder of the jacket. It is like doing counted cross stitch really but thankfully a lot faster. What about all the dreaded ends that intarsia produces at the back of the work? Well where possible I have knitted them in as I go but when you are working black and light colours this shows through, so they are all there dangling waiting for me to sew them all in when finished.

Now of course there can only be one winner and as most of you guessed correctly, I thought that the fairest thing to do was to do a draw of all the correct guesses. And the winner is *insert drum roll* Donna and coincidently Donna was also the first to guess correctly as well.

Then as promised I did a draw for everyone who had a guess and the winner is *insert drum roll* Cindy. Congratulations to you both and thanks to everyone for having a bit of fun.
Posted by Sharon at 3:01 am

We will have to go out together and menace the whole town wearing our ZUCs!!!! She looks lovely!! I knew she was Betty Boop, but I was being contrary!!! How exciting that I won something with my silly guess!!!

She certainly is looking lovely. I agree, knitting pictures is a whole lot more interesting than tiny tiny cross stitching them!

is intarsia hard??? i love winnie the pooh!! would love to be able to knit a pooh jumper one day!! haha!!

The jumper looks amazing! I'm sure it can be addicting knitting this one. I've never done intarsia before but would love to try one day!

Wow that looks fantastic!! cant wait to see it at S'n'B!

i admire your patients with the intarsia. It looks gorgeous.

Very cool! Can't wait to see the finished jacket! You are too talented!

Your needles are on fire!
Betty looks gorgeous.

That's fabulous - the image is so clear. Well done. Are we allowed to see what the inside looks like when you've stitched in all the straggly ends. I'm very curious.

I wonder if I could use my old cross stitch patterns to to a small intarsia project??? Now you've got me thinking.....

Sharon
I am a 47 year old knitting, crocheting cook, this is where I like to share my work.